B. C. thanks for sitting down with us today! Let’s jump right in, shall we? Now that we’re in book two, are things going to get easier for Kennard and Odelia?

Ha ha ha…no. I mean, certain aspects of their relationship are easier now that things are official, and their new power has its perks. The Allurist’s Son starts exactly where A Seer’s Daughter left off—to the second—with everything having changed for Kennard and Odelia: newly married, newly pregnant, newly crowned. Any of those can be an overwhelming life change on their own, but they’re dealing with all of them at once, so this is the two of them under an insane amount of stress. And they’re now paying the consequences for getting what they wanted in book one. As much as they anticipated trouble when they made their choices, the reality is so much worse.

Sounds like they’re going to be in for quite the ride in book two. We find out in book one that it’s likely that Odelia will die if she gives birth, because healers can’t heal themselves; how does this knowledge affect our two lovebirds?

It certainly complicates things. By all other accounts, they should be overjoyed to have a child. As rulers, they need an heir, and they both want to see their love grow into a family, but that fear taints everything.

It’d be hard not to let fear taint everything. What are you most looking forward to the readers getting to in this book (without giving too many spoilers, of course)?

I based the geography and ecology of Carum Sound on Western Washington, and there’s a local delicacy called geoduck that is probably the most phallic-looking food in existence. One of my favorite scenes is a dinner where geoduck is served, because the comedy practically wrote itself.

It was definitely a fun scene to read. Reading this book, it seems that Kennard and Odelia have a lot of frenemies. How are they dealing with feeling like they don’t know where the right step is?

I think we all wish the world were as simple as people we like being good guys and people we don’t being villains, but that isn’t how things work. In a world of court politics and international diplomacy, that truth is amplified. Kennard especially has a hard time with that because he tends to be ruled by his heart first, and his initial gut response isn’t always right.

Kennard sounds like a lot of us. Switching gears a bit, how does the world expand in book two?

There’s a little more insight into what King Uldrio knew and why he chose to create the Treaty of Meriveria. But I’m even more excited about the introduction of Urstille. If you’re following my short stories as well, you get to see a few other nations, but Urstille is the first one outside of Carum Sound. The cultural clash between the Meriverians and their Urstillian visitors make for some fun scenes.

Sounds exciting! We have one last question for you: What can we expect next from you?

Next year’s book, The Healers’ Kingdom, will conclude the trilogy about Kennard and Odelia, but it won’t be then end for everyone. After that, I have Conora, the first book in a duology featuring her, which overlaps in its timeline with both The Allurist’s Son and The Healers’ Kingdom.

Thanks again for sitting down with us. Readers, join us for the launch party on September 19th and your chance to win a free paperback copy of B. C. Marine’s book two of her Meriverian Trilogy, The Allurist’s Son! 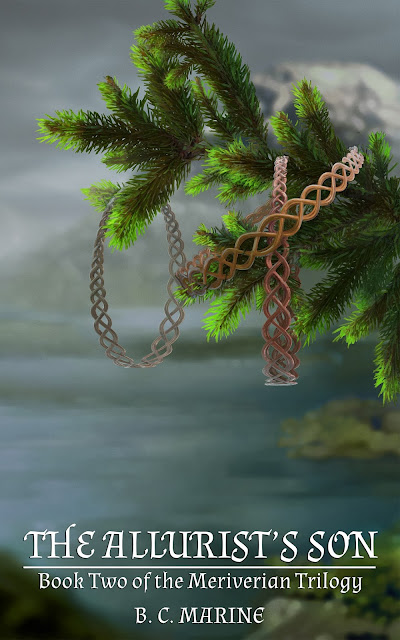 Queen Odelia got everything she wanted—and it just might kill her. She and King Kennard have pulled off a successful coup, but to hold on to their turbulent kingdom, the newlyweds must accomplish the impossible. Subduing the opposition means sentencing Kennard’s family, possibly to death. And although the promised heir of Odelia’s pregnancy helped them in their coup, no Healer has ever survived childbirth before.

Of course, through it all, Meriveria is still at war, not helped by the incompetent military leadership Kennard’s father put in place. Victory may require costly and unpleasant alliances, counter to the kind of rulers they want to be.

Can Kennard and Odelia hold their composure and bring their people together as they face the prospect of losing everything and everyone they hold dear?