Today we’ve got our very own Brandi Spencer, the Secretary-Treasurer of Authors 4 Authors, here with her debut novel Kiss of Treason. We’re so excited to see her work distributed to the public so they can enjoy it as much as we do!
(Note: This blog has been updated since its original publication. Kiss of Treason was formerly published as A Seer's Daughter by B. C. Marine.)
What inspired you to write Kiss of Treason?
I’ve always had vivid dreams. They’re like my own personal movies scenes in my head while I sleep, only better. At some point, I started writing them down because I figured that if I enjoyed them so much, someone else might too.


The base of Odelia and Kennard’s relationship and their destinies started there, and as I built the world and magic system to go around it I took a lot of inspiration from both fairy tale tradition and superheroes. One day, the idea struck me that true love’s kiss seemed almost like a weirdly specific power that every Disneyfied fairy tale had, and I wondered what it would be like if it actually were a superpower.


Are there any themes, symbols, or motifs in your story?
As you probably guessed from the title, destiny vs. choice is a constant theme. How inevitable are things? Is it worth it to change that?


Another is the healing. Kennard and Odelia both have this need to heal people, not just physically, but mentally and socially. However, the two of them have different methods and philosophies about how to accomplish that, and sometimes their desire to avoid or soothe pain does more harm than good.


Who is your favorite character?
I have so many favorites for different reasons. Even my antagonists have things I love about them. So I’m going to say Kennard because he tends to amplify all the other characters he interacts with. He just can’t help but ruffle somebody’s feathers. His banter with his bodyguards, Valerzan and Herman, and his spats with his mother, Melaine, were some of the most fun to write.


How did you decide on a setting? Is it based off of anywhere you’ve been in real life?
Carum Sound is based on the Puget Sound region in Washington. Meriveria is particularly special as it’s based on my home county. We have these beautiful views of both the mountains and the water—sometimes simultaneously if you stand in the right spot—and I love how close these two disparate features are to each other. And yet, throughout both sides, there is a lush rainforest full of pine and cedar tying them together. The combination makes such an apt metaphor for a romance like Odelia and Kennard’s.
Who are your favorite authors?
I have a lot of authors I love to follow, but narrowing it down, I’d have to say C. S. Lewis, Francine Rivers, and Diana Gabaldon.
Can you tell us what your favorite scene was to write?
Like I said, some of the banter with Kennard and his bodyguards is so fun, especially the hijinks it sometimes leads to. And of course, I love a good kiss scene.


But the one that surprised me the most with how much I enjoyed writing it was the poem in Eaund. Kennard is deeply offended by it and launches into this insult-laden monologue, which leads to a passionate fight with Odelia. They’re both raw and open for the first time in a long while, and writing it was very freeing.
Who is your least favorite character?
I actually love writing Melaine because she’s so fun to hate. She has no filter and says some horrible things to Odelia. While writing, I find myself taken aback by some the dialogue that comes out when I get into her character.


What can we expect next from you?
Kennard and Odelia’s story isn’t over yet. I’m preparing two sequels for Kiss of Treason. I’m also planning for Herman and Conora to each get their own spin-off. Fans of my fairy tale retellings might get to see more of their favorites as well. 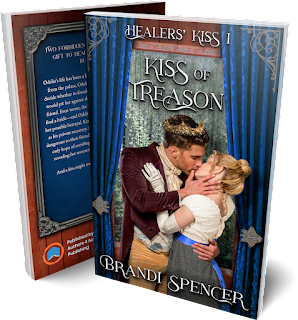 Two forbidden lovers share the rare gift to heal others with a kiss—but at a cost.
Odelia’s life has been a lie. When the queen tries to remove her from the palace, Odelia uncovers the truth. Now she must decide whether to forsake her people or embrace a destiny that would pit her against the current heir to the throne...her best friend. Even worse, the king gives Prince Kennard one year to find a bride—and Odelia is nowhere near suitable. Unaware of her possible betrayal, Kennard tries to help Odelia by hiring her as his private secretary. But the change in status proves just as dangerous to their friendship as distance would be. Though her only hope of avoiding a civil war lies in winning his heart, revealing her secrets too soon could cost both their lives. And a kiss might not be strong enough to save them…