What inspired you to write Fyr?
When I want to start writing a new book, I usually start with a random concept to spark ideas. Celestial spheres was a term I’d heard in Science class and pops up in very old texts. I wanted to look more into it to create characters based off of the concept. Instead, what I found in my research was a world of possibilities—literally. The term is the archaic theory of the universe, so I decided to create a world based off this system, and Fyr was born.
Ancient theories were full of symbolism. Did you incorporate that in Fyr?
Well, I am a bit overboard when it comes to symbolism and themes. The celestial sphere system of the universe in itself is symbolic. Back in the day, they envisioned other elemental planets in addition to the ones they knew existed. Fire, to me, was the most profound since it can mean anger or passion, but foremost, a fuel to light the way. I designed my prince to have fire as an innate power for all these reasons. He battles darkness, another symbol that scares us from a young age. Symbolically, it is the propensity for evil in us all. Light comes into play with Toury as innocence, goodness, and guidance. There are different kinds of magic, one being stone magic, so all the precious stones have properties much like healing crystals. The stones tie into eye color, which is paramount in the land as a symbolic window to the soul but also as power and familial markers. There are themes surrounding all this magic of the conflict of love and power and how autonomy is our most precious human asset.
Wow! Your world is so vibrant. How did you craft it?
Honestly, bit by bit. When something cropped up that needed answering, I researched or found an explanation. Based on a new planet, it needed to be enough like Earth to find a connection. I thought to myself, what if back when they believed in this planet, they were able to get there? So I crafted my world with a hodge-podge reinvention of British history when it comes to architecture, dress code, and manners. However, it isn’t precise as I wanted to allow for a world to evolve without the implementation of technology and industrialization—almost like an alternate universe feel.

And of course, that world is populated with such compelling characters. Who is your favorite?

Absolutely the hardest question to answer, like asking which child is your favorite—it’s a good thing I only have one kid! But as my son would say, “I love them all.” Honestly, the evil, the good, they are my creations. If forced, I must say Alex. Throughout the series, he will face the hardest decisions and must change the most. Toury is an extremely close second. She is strong from the beginning but has to face a strange world and insecurities. I never doubt her as I do Alex, which makes him so fallible and beautifully human.

They’re both great! I can’t wait for readers to fall in love with them too. So, who are your favorite authors?
Again, impossible to answer. I’ve read way too many books and enjoy a lot of genres. I have a soft spot for the classics, though, particularly British literature. Authors who have left the largest impression upon me are Jane Austen, Thomas Hardy, Ernest Hemingway, JK Rowling, and Nick Hornby. There are a lot more, but these have been the most impactful.


Thank you so much for sharing with us, Lisa. One last question: what can we expect next from you?
I’m working on book two of the Celestial Spheres, entitled Draca. Next year, we’ll see Alex and Toury go through more struggles and triumphs and face different villains, and we’ll get a glimpse of dragons. But before then, I’m releasing another book baby into the world. In February, I’m launching a YA paranormal romance series, entitled The Immortal Transcripts, centered around Greek gods living a present day “mortal” life, where the god of love causes an uproar by, ironically, falling in love. I have loads of ideas but am trying to limit myself to these two series for the time being. 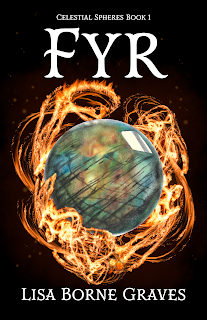 
At seventeen, Toury arrives in Fyr, where magic is power, a prince’s love is deadly, and female autonomy is a dream. Formerly a loner and burden to her adoptive parents, she ruins her chances of a fresh start by offending an ogler who just happens to be the prince.


Alex, the Prince of Fyr, is no novice when it comes to pressure. He has to face his father’s ailing health, the expectation to marry soon, and the hidden necromancers trying to take over the realm by exploiting his dark curse. At least there’s hope in a cheeky savior, but Earth girls aren’t so easy.


Toury and Alex learn that the strongest magic cannot be conjured but must be earned. They must risk their lives, hearts, and futures to save the land from a darkness of apocalyptic proportions. But can they trust each other enough to save Fyr? Or will everything they hold dear turn to ash?