Beatrice, thanks for chatting with us today! Let’s dive right in: What inspired you to write Stars and Bones: A Thief in the Castle?


Stars and Bones started out as a vague and uninspired fantasy story idea. I lacked the needed enthusiasm, so it sat on my computer. It was early fall, and I planned on attempting NaNoWriMo for the first time, so I thought I’d let the fantasy story idea sit and ferment. I then read the Throne of Glass series by Sarah J. Mass—yes, the entire series. All but the final book were out, and I devoured the series in about a week and a half. I LOVED it. I hadn’t had a book keep me up until dawn reading since Harry Potter and the Half-Blood Prince.


Then the mythical ray of inspiration struck, and I had a whole new plan for my vague fantasy story. I still wanted to use it for NaNoWriMo, so rather than writing, I planned. I built the world, designed the characters, and made notes for possible scenes. I made a vague outline, and every time I went into the doc, I added more and more. I couldn’t stop thinking about the story I was making. I’d never been in love with a project so much. It bordered on obsession.


I didn’t make it to NaNoWriMo. The last week in October, I gave in. I wrote the rough draft of what would later become Stars and Bones: Thief in the Castle in about a week, and I spent November turning that rough draft into a first draft.
Wow, that’s pretty incredible that you wrote a rough draft in a single week! Are there any themes, symbols, or motifs in your story?


Probably. Anything I write tends to have themes of girls seeking adventure and a way out of their current situation. There is also a fictional character that is often mentioned. His name is Leon Stark, and he is the subject of adventure and romance novels within my novels. He’s not in every single one, but he’s in several. He’s like James Bond, but fantasy and typically a pirate of some kind.
Readers will definitely have to search for him during your series. Speaking of characters, who is your favorite?


I love Juniper. She’s smart, headstrong, and can be brash and selfish. She’s driven by her heart, even if she wouldn’t think so. She’s been dealt a crappy hand in life, but she’s making the best of it. She is a “learn to swim or drown” kind of girl and obeys laws when they suit her. She’s clever enough to know when she can bend laws and logic to fit her desires. She’s also aware of when her actions might affect others.
I would say that Juniper is also my favorite. How did you craft your world?


Painstakingly and over time. From conception to what I could consider a finished world, it took about a year or so. I would add things and places and concepts as I thought of them, so I ended up with A LOT of little notes in my purse from when I’d think of something cool at work. I’d scribble it down and stuff it in my desk or in my pocket. I had one piece of scrap paper (I don’t have it anymore, because I hate clutter) where I detailed Mage’s Bane. I scribbled down effects, history, ingredients, and things like that.


Sometimes that’s the only way to do it. Is it difficult at all to keep track of all the magic in your book?


It’s been difficult to keep track of everything! I have a red notebook on my desk where I wrote down everything I made up when I made it up, so things like names and character descriptions and spells and anything that I might need to reference later. Proper nouns, events, history, lore. It all went into the notebook.
I have one of those too, but even with that, it can be hard to keep track of everything. How did you decide on a setting? Is it based off of anywhere you’ve been in real life?


The setting of Rusdasin is very much like southern Illinois in the sense of climate and landscape: mostly flat, spotted with forests, with touches of the Shawnee National Forest. The city part is a cumulation of the few cities that I’ve been to and what I’ve imagined reading other fantasy books and watching travel shows. I don’t physically travel; I watch TV.
I think a lot of people do that. Let’s switch gears a little bit: Who are your favorite authors?


We’ll have to add some of them to our reading lists. Before we let you go, we’ve got one last question for you: What can we expect next from you?
I’ve got a steampunk/fantasy trilogy coming soon. The first of which is hitting later this year and is called Hard as Stone. I’ve also got a handful of WIP, including a gender-bent Aladdin retelling that I’ve been working on for about two years.

Those all sound great! Thanks for chatting with us today, Beatrice.


You can find her upcoming novel, Stars and Bones: Thief in the Castle here for preorder. Don’t forget to join us this Saturday for the launch party and a chance to win a free paperback copy! 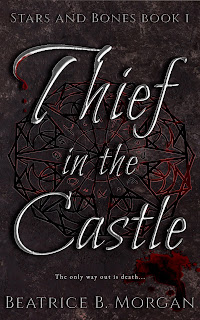 Thief in the Castle
By Beatrice B. Morgan


The notorious Juniper Thimble is destined for execution. Caught stealing the king’s crown—in addition to her long list of crimes—she has only one way out. Juniper must survive the biggest, most deadly con of her life, commissioned by the king himself. Disguised as the crown prince’s lover, she is forced to protect him with her life…literally. Guarded by a surly squire, relentlessly attacked by demons, and surrounded by mysteriously disappearing servants, Juniper must dispatch the threat to the prince’s life before they find out who she really is.
Updated 4/2021 to reflect a change in penname and cover change.