Thanks for joining us today, Karen! First thing’s first, what inspired you to write Songbird?
I’ve been somewhat Tudor-obsessed since I was a kid, and I read a lot of Tudor history. This story was inspired by something mentioned in passing in a bio of Henry VIII, that he was such a music lover that he once bought a boy to sing in the royal choir. That character does exist in Songbird, but I came up with Bess’s storyline because I wanted to explore what it would be like for a girl to be sold by her parents—it gave her a better life, obviously, but as a child, that wouldn’t be your first thought.
Tudor history is definitely one of the more interesting periods. Are there any themes, symbols, or motifs in your story?
Finding out where you belong is really a big part of the story. It’s important for everyone, obviously, to feel that they belong somewhere, but if you don’t have a family or a stable living situation, it’s more difficult to figure that out, and sometimes it leads to some bad decisions. At least on the part of Bess.
I think that’s a theme that many people will relate to. Let’s switch gears a little bit: Who is your favorite character?
That’s a tough one. Bess, because she’s my main character, and the story is told through her point of view (and because I see a lot of myself in her), but also Tom, because I put the poor guy through so much.
It’s hard to pick my favorite, but I’d lean toward Bess myself. Did you find it difficult to research for your novel?
More the opposite—I found it difficult to STOP researching, because there’s just so much out there about the period, and one tiny question can lead to books and websites and blogs and another book…well, you get the idea.
There’s definitely a lot of information out there! What about this time period drew you in?
This has always been an interesting period for me, but I hadn’t originally intended to write about it, because there’s a world of good Tudor fiction out there. Then again, there’s a world of Tudor fiction, and those of us who read it are always looking for new stories or points of view, and I thought I found a new way to look at the era without making it specifically a Henry-and-the-Wives book (though they’re in it, of course).
Henry VIII made the period feel a little more like Keeping Up with The Tudors compared to other periods. Do you have a favorite wife of Henry VIII?
I have two—Anne Boleyn, because if she hadn’t come along, Henry might have stayed married to Katherine of Aragon, England would have stayed a Catholic country, and all of Europe might have been different, and Anne of Cleves, because she kept her head and got a great life out of giving Henry what he wanted, which in her case was a divorce.
It’s hard to choose a wife, but I think my favorite would be Anne of Cleves for the same reason. But enough about history—if you can even believe I’m saying that—who are your favorite authors?
Dorothy Dunnett is my absolute favorite—her Lymond Chronicles are a master class in historical fiction. I also love Mary Doria Russell, Barbara Kingsolver, Laurie Colwin, Libbie Hawker, and Margaret George. Mostly historical fiction but not all.
All great authors. I’ve got one last question for you before I let you go: What can we expect next from you?
I’m working on two different books at the moment. One is about two sisters during the Great Depression, set in coal country and Philadelphia. The other, which I just accidentally started, is another Tudor novel about a supporting character from Songbird. Your guess is as good as mine as to which will be finished first.
Both sound really interesting! Thanks for joining us today, and readers don’t forget to come to the launch party on November 2nd for your chances to win a free print copy of Songbird! 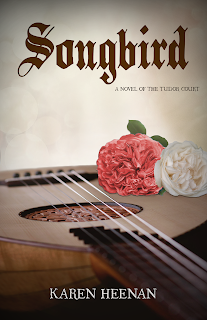 
Bess has the voice of an angel, or so Henry VIII declares when he buys her from her father. As a member of the Music, the royal company of minstrels, Bess grows up within the decadent Tudor court, navigating the ever-changing tide of royals and courtiers. Friends come and go as cracked voices, politics, heartbreak, and death loom over even the lowliest of musicians. Tom, her first and dearest friend, is her only constant. But as Bess becomes too comfortable at court, she may find that constancy has its limits.

You can pre-order your copy here.