Beatrice, thanks for sitting down with us today. Let’s dive right in, shall we? What inspired you to write Hard as Stone?

I’ve always had a soft spot for steampunk, but it wasn’t until I read Andrea Cremer’s The Inventor’s Secret trilogy that the idea for Hard as Stone really took root. I loved the world she built, with crazy-impossible machines and steam tech, and falling in love with that world and those characters gave me the final dose of inspiration to turn the “steampunk story” amalgamation of notes into a real story.
Isn’t funny how one thing can just change things completely? Are there any themes in your story?

There’s definitely the theme of flight, but not of airships—of the spirit. I know that sounds super cheesy. Raven, my main character, leaves home for the first time. Her flight opens her eyes to the world that she’s only heard about and daydreamed about. She learns that there are a lot of different people out there, not all of which have good intentions.
I think that’s something a lot of people can relate to. Can you tell me who your favorite character is?

This is a tough question. I love Raven—she’s a sheltered dreamer who doesn’t think she’s as smart as she is. She shares my love of adventure and pirates and the beach. I also have a soft spot for Ivy because she’s spunky and clever.
Hmm...I’ve got a hard time picking my favorite too. So, how did you craft your world?

I crafted the majority of the world and characters as I wrote the first draft (I had an abnormal streak of inspiration and creativity). I knew kind of where the story was going, so I had a lot of room to play with characters and places and magic. After that first draft, I started the good old notebook system where I write down everything I made up—names, places, rules, legends, etc.
It’s always nice when things work out like that. Is this your first time writing Steampunk?

Yes, and it won’t be the last! I loved the dynamics of a world with over-the-top tech. It reminds me of Final Fantasy. I have very fond memories of Final Fantasy X and X2.
That’s good to hear! How did you decide on a setting? Is it based off of anywhere you’ve been in real life?

Rhynweir is reminiscent of southern Illinois, namely the Shawnee National Forest - there’s a lot of trees, rocky cliffs, coves, and streams. Raven’s home of Silver Glen isn’t unlike my home town. It’s small, everyone knows everyone, and most are traditional in their way of thinking.
It’s always nice when you can throw in those extra touches easily. Let’s switch gears—see what I did there? I’ll show myself out—a little. Who are your favorite authors?

I’ll read anything by Sarah J. Maas, Holly Black, or V. E. Schwab. Each has written a book that has kept me reading into the wee hours of the morning. I’m also a big fan of Stephanie Garber. I loved Caraval!

We’ll add them to our reading list. Finally, before we take up too much of your time: What can we expect next from you?
Book two in my Stars and Bones series is dropping this spring, and then there are the next two books in the Hard as Stone trilogy. And, of course, there is the Aladdin retelling that I keep talking about that’s still sitting on my computer.

Thanks again, Beatrice, for joining us. You can find her newest novel, Hard as Stone, here. Don't forget to join us for her launch party on December 7th! 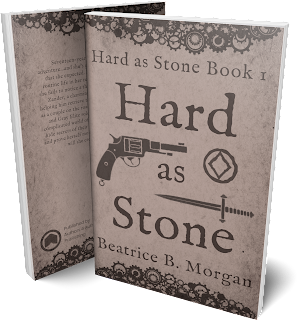 Hard as Stone
By Beatrice B. Morgan


Seventeen-year-old Raven Thane wants an adventure...and she’s going to get one. Just not the way that she expected. Bored and disinterested with a routine life in her remote underground community, she fails to notice a thief during her turn at guard duty. Zander, a charming sharpshooter, tasks her with helping him retrieve the mysterious stolen item. Posing as a couple on the road, they’ll face deadly automatons and Gray Elite soldiers, entangle themselves in a complicated world of spies and freedom fighters, and hide secrets of their own. Can Raven fix her mistake and prove herself more than a simple country girl? Or will she create even more chaos?
Updated 4/2021 to reflect a change in penname.