Thanks for sitting down with us today, Lisa. Let’s dive right in: What inspired you to write Quiver?
Quiver happened to be the first novel I ever finished writing, just published much later. In the end of 2006, I had a semester of grad school under my belt, and my brain felt overcooked from writing analyses and dissecting literature with no time left for creative writing—something I had done daily my entire life until then. I wanted a writing prompt, so I picked up a mythology book and reread the tales of lovers. Cupid and Psyche had always been a favorite, so I decided to reimagine the myth, but what I ended up doing was actually reinventing it.
Very interesting! Have you always had a love of mythology?
I have always loved books and stories of all kinds. I think it was in middle school when I first really learned a lot about mythology and the impact it had on cultures. I was fascinated how ancient civilizations weaved wondrous stories to explain the world around them. I started realizing every modern story is a creative echo of an ancient one. The Greek ones resonated most with me, due to having some Greek family who told me stories about my relatives and fussed over my “Greek eyes” while stuffing me full of baklava and kourabiedes over the holidays.
That’s definitely true, but I can at least say the new versions are pretty fun to read. Let’s switch gears a little: who is your favorite character?
It’s such a difficult question. My favorite to write in Quiver was Aroha. She was deliciously vain and incorrigible and so unlike me. It was such a challenge to write her, but I busted out my acting chops and imagined being her. At times, I cringed or laughed at what I was writing. However, I also have a love for my other three narrators—Lucien for his brains, Archer for his intensity, and Callie for her strength in the face of her entire life changing. I have a feeling my favorite will shift each book.


I’m definitely a fan of Aroha too. Tell us a little about your research process.
I had been well-read in mythology already, so basically I wrote off my memory, changing what I wished, like some of the more taboo issues in their family tree. After I wrote the first draft, I reviewed my gods and tweaked and added a few things. The largest research process wasn’t the mythology; it was locations. I researched so far as to figure out what street my character would walk down in Nice, France, and the exact library he would need to go to for an archive that carried works from the 16th century. In 2006, this research process was a bit harder than today. Google Maps became a godsend during recent edits. I was able to see seamless pictures of the actual streets of NYC to get a true feel for the setting.


Speaking of the city, what made you decide on modern-day NYC for the retelling of this myth?
It’s a blur as to which trips from the Philly area made me align Greek mythology to NYC, but I remember going to the MET and seeing their Greek statues: Prometheus and Atlas at Rockefeller Center, and later Athena in Athens Square. I’ve always linked great sculptures to the Greeks, and this was the place I saw them most. Add in a nod back to my teenage years stalking celebs at the Plaza and walking through the Upper East Side to imagine being a part of that social circle I had seen in movies, I decided this must be where my tale would begin. But my gods will also be going places.

We’re looking forward to seeing where they go! What can we expect next from you?
My next novel out is Draca, book 2 of Celestial Spheres which will be out in July. We’ll see new villains and the difficulties it takes in repairing a torn relationship. I’m also working hard on Fever, book 2 of The Immortal Transcripts for February 2021. It’ll take the gods to new heights and challenge them in various ways. I’ll be rotating these series as well as blowing off the dust from some shelved books that need revising, or most likely, I’ll start new things simultaneously as I often do. No matter what, I don’t stop writing, so I’ll have something interesting for readers.

Thanks again for talking with us, Lisa! Don't forget to join us for the launch party on Saturday, February 1st for your chance to win a copy of Lisa's book! 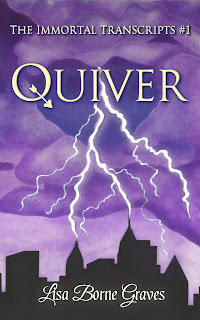 What would you do if you could live forever? Could you hide it from the one you truly loved, especially if her life depended on it?

Thanks to his dysfunctional Olympian family, Archer Ambrose finds out firsthand how difficult this can be. He never falls in love but bestows it on others—until he meets Callie.

When Callie Syches moves to the Upper East Side to prepare for her father’s impending death, she doesn’t expect to meet the boy of her dreams. She also never believed her father’s harebrained theory about myths, but her uncanny ability to “see” uncovers godly secrets Callie can hardly fathom.

With an immortal family demanding absolute obedience, how far will Archer go to protect his love from the storm the gods will unleash upon them?

In this reinvention of Cupid and Psyche, experience an electrifying series where familial and romantic bonds are at war, and knowledge could mean the end of everything…or a new beginning.