Thanks for sitting down with us today, Beatrice!

We’re now getting into book two, is there anything you’re particularly excited about for the readers going forward (without giving any spoilers, of course)?

Oh, oh! I am excited to get to the Undercity. We talk about it in book one, and now we get to see it and meet the people who live there. We get to meet the people who shaped Juniper’s life. We also get more magic! I confess—Ison’s arc is one of my favorite I’ve written.
The Undercity is definitely very different from what we’ve seen before. Book one ended on a bit of a sour note for Juniper. Do you think that’s affected Juniper in any long-lasting way?

It has. Heartbreak hurts, and though the sharpness dulls over time, we remember the pain. Juniper will remember too. She has lived a life in which she’s kept herself reserved, even from those she considered friends. The first time she opened herself up, she got hurt. She’ll remember that.
That will definitely make her very relatable. Now that we have a broader cast of characters, do you have a new favorite to write?

I still love Juniper, but each new character brings their own fun to the page. If I had to pick one, I’d go with Xavier. He’s a sassy, seemingly apathetic assassin who’s not had a reason to be happy in a long time. But as Juniper shakes up the Undercity, he finds several reasons.
Xavier can certainly be fun, and he has a lot more depth than we saw in book one. Speaking of differences, tell us a little bit about how the world expands in book two.

Beyond finally seeing the Undercity, we also get more of Rusdasin. Book one took place mostly within the walls of Bradburn Castle. There’s a whole city out there to explore! Not to mention the vast world beyond.
Let’s change gears a little: you told us previously that the first draft of Thief in the Castle only took you a week to write—how long did it take you to write its sequel?

Longer than a week. I can’t say for sure how long Mage in the Undercity took, but it didn’t have the weird spellbinding effect that Thief in the Castle took. For book one, I was just writing away, adding in details and scenes and characters as I thought of it. While the first draft and final draft share similarities, they are different. Book two started a lot closer to the final draft. I had a clearer goal.

(That’s the same thing that happened to book four. The last leg became the first leg of book five.)
I can certainly relate—that’s how my three books turned into six books. In your novels, you like putting in themes of women going on adventures and moving out of their comfort zones. Is that something that translates into your own life?

I wish it translated into my life more. I am a hermit. I’ve gotten better with little steps, like not swearing hailstorms at the strange who parks in my parking spot at work. (But seriously, I park halfway down the lot on purpose so people won’t park by me, and this guy picks the one spot I do?) I’ve started being more open to things that pull me out of that comfort zone, like going to new places and meeting new people. I want to take chances and opportunities that give me more perspective and experience, that allow me emotions or sensations that I haven’t had before. Even if it terrifies me at the time.

Now, I’m not going to go skydiving or something crazy like that anytime soon.
Maybe after you’ve finished the series, Juniper will have inspired you to do more than you think you can! Do you think any authors in particular have influenced the way you’ve written the Stars and Bones series?

Every book I read adds something to my writing quiver. For Stars and Bones, the biggest influence has been Sarah J. Maas. Her Throne of Glass series blew my mind and reminded me just how much I love high fantasy. Also Leigh Bardugo’s Six of Crows/Crooked Kingdom; I love how the characters are all horrible people, yet we root for them. Currently, I’m ready House of Salt and Sorrow, and I love, love, love the murder mystery and haunted house vibes. This book will be a future influence.

We have just one last question for you: what can we expect next from you?
The third book in the Stars and Bones series, Dreams in the Snow; the second book in my gaslight fantasy trilogy, Thick as Blood; and my recently signed fantasy of pirates, magic, and princes, The Reaper of Zeniba.

I just had one of those moments of disbelief. Holy cow—I listed three books. Three books! All three of which are in the process of being published. I can vividly remember painting the world of Stars and Bones with wild abandon during the first draft. Since then, I’ve finished seven books. Seven 90k+ novels, in...three years. HOLY COW. (This is why I’m still single, isn’t it?)

Holy cow, indeed! Readers, don’t forget to join us for Mage in the Undercity’s launch party on April 11th for your chance to win a copy of B. B. Morgan’s latest book! 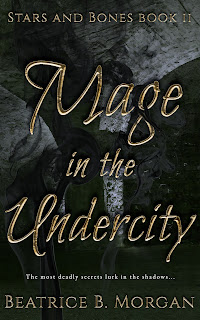 Mage in the Undercity (Stars and Bones 2)
by Beatrice B. Morgan

The unbeatable Juniper Thimble has been broken. Outed as a mage, she has lost the love of her squire and gained a king’s ransom on her head. Meanwhile, Ison is tormented by memories of what the demon-summoning apostate made him do. To stop such a powerful evil, they must survive suspicious knights, old masters, and an underground cult. But can the assassin embrace her magic or the mage overcome the blood on his hands?

Updated 4/2021 to reflect a change in penname and cover change.