Lisa, thanks for joining us today! Let's jump right in: What inspired you to continue Toury and Alex’s story with Draca?

Well, things just weren’t left happily ever after with them. The necromancer plot was almost wrapped up, but their relationship was left in tatters. It would be impossible for them to go back to the way things had been, since the experiences they went through to save Fyr were traumatic. There were so many unanswered questions to finish up too: Who gave Alex the curse in the first place? What really happened to Toury’s parents? What effects will removing the curse have on Alex? On their relationship? How can they rule together in such a patriarchal world?

We finally get to meet draca! What was it like to write them?

Fun! I knew I was going to always include them at some point and envisioned what they’d look like, but I wasn’t going to have them “talk”—or more like telepathically communicate—but then it just happened. As I was writing a poignant scene with the first draca readers meet, it just made sense to hear her side of the story and to feel her anguish. It worked out well because it makes readers empathize more with the draca, while also portraying humans as the real beasts.

Besides the draca, are there any themes, symbols, or motifs in this book?

Most of the same symbolism from Fyr is echoed, and the theme of gender equality as well; however, Alex and Toury will delve deeper into the socioeconomic issues of their world. The theme of familial impact on our characters will be explored, particularly how far the sins of a parent can fall on the child. Friendship is also a theme, seen through how some grow while others fracture. Also, character growth is huge. How my characters mature highlights the very nature of growing up.

Toury and Alex went through a lot in Fyr. What was it like to write such changed characters?

It was quite difficult to write about characters who have already grown so much, but I knew they weren’t done. Neither Alex nor Toury are ready to rule or marry at the end of Fyr. The hard part was trying not to get them to the point of marriage too quickly or easily. They change even more throughout the many challenges I throw their way. The series is a YA crossover, so I truly feel that by the time Draca concludes, they have matured into adulthood. This is what I love to write. I adore that age, and due to teaching college freshmen, I see it daily. Just watching them mature that first year—they come in as teens and leave that year as adults. It makes me reminisce on my own days of self-discovery and gives me a lot of understanding into young adult minds, making it easy to write such characters.

How has the Fyr sphere changed since the first book?

Well, the necromancers have been defeated—for the most part—but Alex inherits more of his father’s enemies who he never knew existed. Trying to rule his kingdom without much knowledge of who they are and what they want is a huge disadvantage. The sphere itself hasn’t changed so much as Alex and Toury’s awareness of things outside of the castle is enlightened. Reform will come slowly to such a world, but Alex does make some changes from the very start of his reign. Can’t tell you any more without spoilers, so readers will have to wait.

What can we expect next from you?

Next up is a return to The Immortal Transcripts series for Book 2, titled Fever, which picks up where Quiver left off. It’s out February 2021. Currently, I’m writing Book 3 of that series, Shudder.

What’s next for Toury and Alex? Book 3, Bladesung, ties up their love story and will be out the summer of 2021, but those in love with them and their world shouldn’t despair. I have plans for two spinoff novels sometime in the future. I love the world I created, and I’m not quite ready to let go of the characters yet—we will see Toury and Alex again, but not as main characters, more like cameos.

Join us this Saturday, July 18, for Draca's launch party! 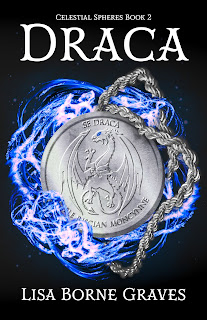 Draca
by Lisa Borne Graves
After everything they’ve been through, Alex and Toury deserve a happily ever after, but being king proxy is not all it’s cracked up to be.
Alex inherited a world divided by his father, including incensed rebels—and a rogue dragon on the loose!—but the most pressing issue is Toury. Though he chose his kingdom over her and hurt her, by the god and goddess, he loves her too much to let her go. But can he ever do enough to deserve her?
Toury is a shell of her former self and grappling to figure out who—in this still-alien world—she will become. Her relationship is a hot mess, nightmares plague her, and rooting out necromancers is more than overwhelming—not to mention family baggage. Becoming queen means overcoming her past and seeing Alex for the man he is and not the cursed monster who destroyed their love.
Rebels, dragons, and betrayals galore are just another day of court life. Toury and Alex managed to save the world, but can they repair a torn kingdom while their personal lives are in shambles?