Beatrice, thanks for sitting down with us today! Let’s jump right in. We’re in book two now! Is there anything you’re particularly excited about for the readers going forward (without giving any spoilers, of course)?

I’m excited for the characters in Thick as Blood; one of my favorite characters that I have ever written really comes into this book. Confession: it’s Conrad. His personality came so easily, and he has a Chaotic Neutral moral alignment that is so versatile and super fun to write. We also get to see Raven on her own more so than in Hard as Stone. We’re also exploring more of the world, and that is always exciting!

Conrad is also my favorite; he’s a breath of fresh air in this book. So, how was it writing in other countries besides Rhynweir?

Fun. One of my favorite things about writing and reading fantasy is how easy it is to explore. As the writer, I can craft these different countries and kingdoms to be whatever I want (within reason, of course). Tinatun has been so much fun to create. It’s mostly tropical, and because it’s such a vast land, there are different cultures within it. It’s been fun to explore how all the different cultures in the world of Hard as Stone feel about magic and how they do things and what makes them different. As an introvert who is too poor to travel, books are as close as I’m going to get for a long time.

I can relate to that, and I think we all need a bit of “travel” while we’re all stuck indoors. Now that we’ve expanded the cast of characters, who was your favorite to write?

I probably should have read all the questions before I gushed about Conrad. He is definitely high on my favorite character list. Thalame is also up here. Thalame is rough around the edges, quiet, and has a dark history he doesn’t like to talk about. He also has healing magic. One thing that bugs me in fantasy is how healers are stereotypically female and have that motherly personality. Thalame is not motherly, and I love that about him. He isn’t the stereotypical healer.

No worries! Well, just because Conrad’s your favorite character doesn’t necessarily mean that he’s your favorite to write. So, it’s only been a couple of months since Raven dreamed of seeing a much bigger world than Silver Glen—do you think she regrets that wish at all during the plot of this book?

She does at certain points when the adventure becomes uncertain or scary. She has moments when she doesn’t know what is going to happen next, and it terrifies her. She is going to see parts of the world that she had only before heard about and learn that people don’t always hold the best interest of others and that she must believe in herself.

I think it’s the same as when we make a life-altering decision: we have second thoughts halfway through and panic and lose sleep and can’t eat. Unless that’s just me.

It’s not just you, that’s for sure. Switching gears a little bit (see what I did there? Eh? Eh?), of all the automatons in your world, which one do you think ours needs?

I had to think about this one. Right now, I think we could use the Slender. They patrol the streets of Moorin like street cops; only, they are incapable of bias or prejudice. They’re also super cool looking: seven feet of shiny steel and limbs made for easy movement.

There are also Pots, which didn’t make it into the final draft. Pots are these short, wide automatons that have bodies that open to reveal a coffee and tea bar. They wander around the cities and serve fresh coffee and hot tea, ready at the inserting of a coin. In the summer, they serve fruit smoothies. In the winter, they serve hot chocolate and spiced cider.

A machine that walks around and offers people coffee? I’ll take three, thanks. Last question: What can we expect next from you?

After Thick as Blood, I have the final book in the Hard as Stone trilogy: Strong as Steel. In the Stars and Bones series: book 3, Dreams in the Snow; and book 4, Nightmares in the Ice. There is also The Reaper of Zeniba, a YA fantasy with a splash of magic and pirates.
Thanks again for talking to us today! Don't forget to join us for Thick as Blood's launch party on August 22nd! 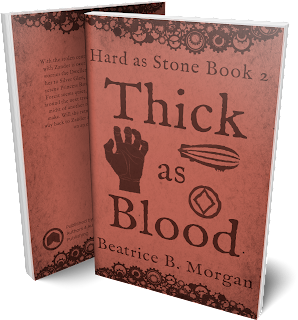 Thick as Blood
by Beatrice B. Morgan
With the stolen centrum recovered, Raven’s adventure with Zander is over. Or is it? Raven’s lingering fever worries the Dwellers, and Zander is set on returning her to Silver Glen, pushing her out of their plans to rescue Princess Rosaria. But even when the Hammel Forest seems quiet, a dangerous automaton is always around the next tree. After Raven finds herself in the midst of another rebel caravan, she has a choice to make. Will she return to life underground, find her way back to Zander and the mission, or get swept away on an exciting new journey?
Updated 4/2021 to reflect a change in penname.