Thanks for chatting with me today, Renee! Let’s jump right in, shall we?
Congratulations on your debut novel! What inspired you to write One Thousand and One Days?

I was first starting as a writer, and I looked at #mswl (short for Manuscript Wishlist) where agents post about the kind of submissions they want to see. One stood out to me, which was a fairy tale with a twist. I wanted to write about people and culture we don't see often in Western literature, and I decided (at that time) to change the story into a love triangle...so I chose the story of Scheherazade and the Sultan. Of course, after multiple rounds of edits and revisions, my original concept has changed a lot. There's more romance in this version, and no love triangle.

Personally, I think it’s much better without the love triangle, so I’m glad that it got to where it is. There are plenty of themes and symbolism in your book—is there one that you enjoyed including most?

My favorite part was researching Islam and learning about the religion's marriage traditions and teachings. I included parables such as the story of the fish who wanted to leave her lake and the description of marriage as being like clothing. They were really beautiful and actually helped my own spirituality and understanding of marriage.

It was really lovely being able to immerse myself in another culture and religion while reading this book, and I’m sure the readers will feel the same. Switching gears a little, who is your favorite character?

This will be wildly unpopular, but my favorite character is the Sultan's first wife. I don't want to give spoilers, but I love her courage and nerve (and a little bit of her evilness).

I think readers will be surprised about that, but I don’t think writers will be—my favorite to write are also the villains because they’re so different. How did you research for the retelling to keep the time period and religion as accurate as possible?

As I researched the origins of the fairy tale, I found some people attributing the story to Shahryar's father (name of character from my story). Harun al Rashid was probably the strongest and most influential ruler of the Abbasid Caliphate. But he had two sons...and what happened with them was, to me at least, more interesting. So I decided to loosely (very loosely) base the main events off their lives. I also loosely based Sutaita on an actual Muslim scholar, Sutayta.

As far as culture and religion references, I had some outstanding sensitivity readers, Gabriel and Noreen, whom I found on my writing critique site, Scribophile. They gave me great feedback mostly about the religion, but since the culture was one that strongly emphasized religious beliefs, it helped with that as well.

The blessing of sensitivity readers—what would we do without them? Are there any authors who really inspired you to write?

With this book, I was definitely inspired by Jacqueline Carey's Kushiel series. I loved the rich, sumptuous prose and presentation of the main character, and I think it definitely influenced my writing style with this work. It helps that her work is also what I'll call historical fantasy...a fictional fantasy that draws heavily on real world historic events and situations.

I think so too. We don’t want to keep you too long, so here’s our last question: What can we expect next from you?

I'm currently working on an epic fantasy that will have a mixture of traditional fantasy elements and a steampunk setting. It's going to take a long time, though, since I just started writing the first book.

Thanks again for chatting with me today! Readers, don’t forget to join us on Saturday, November 14th to support Renee at the launch party and your chance to win a free paperback copy of her debut novel! One Thousand and One Days is currently open for preorder! 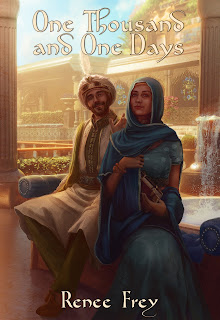 One Thousand and One Days

Once upon a time, a grieving sultan made an edict: he would marry a new bride every night and kill her the next morning, before she could betray him.

Sutaita, daughter of the Sultan’s vizier, planned on a life of quiet study. But when she learns she and her sister must be the next two brides for the bloodthirsty Sultan Shahryar al’Mamun, Sutaita decides to change their fortune. Staying alive by telling stories every night, she must buy enough time to solve the mysteries surrounding the Sultan’s edict.

Shahryar has hidden a dark secret from all the history records. If discovered, it could cost him his empire and his life. But meeting Sutaita changes everything. Intrigued by the magic of her stories, he cannot find it in his heart to kill her, a heart he had hardened long ago against any sort of love.

In this retelling of the Arabian Nights frame story, can Sutaita slip past the walls around the Sultan’s heart and soul? Or will she end up like so many brides before—with her head on a chopping block?