Melion, thanks for joining us today! Let’s dive right in, shall we?

First, congratulations on your debut novel! What inspired you to write Exile?

This is a difficult one to answer, if I’m being honest. I wanted to write a character who was deeply flawed but who possesses an internal drive to grapple with, and overcome, her flaws. I like characters who acknowledge the dangerous, unsavory aspects of themselves and struggle to be good despite their own inclinations. I’m not a fan of grimdark, I should add, because I prefer to see the good triumph in the battle of good versus evil, but I think it’s important to acknowledge the truth that even those who are good are not without tremendous flaws.

It is nice to see a character being truly flawed and seeing them come to terms with it throughout the book. Are there any themes, symbols, or motifs in your story?

Redemption and forgiveness are themes which stand out readily. The inclusion of the enfield (a creature which I consider woefully underused in fantasy, by the way) is used as a symbol. Fire is the motif that comes to my mind. I like playing with themes and symbolism, so there are certainly others. Honestly, I’m really fun to run into at a party.

We’re sure that you are—we’d go to a party that you’re at. Tell us, who is your favorite character?

You’re asking all the hard questions, I see. Of course, I’m rather attached to all of them, but if I had to pick a favorite, I’d say Uncle Roland. I suppose people would expect that I choose Bryn, being that she’s the main character, but Uncle Roland is the one who elicits the greatest emotional response from me. I feel a bit sorry for him that he’s the calm, rational person, and yet he isn’t the one upon whom a story is centered. He has to stand aside and watch his last relative, a person of whom he’s quite fond, face the consequences of her own poor decisions, and he’s powerless to do anything of substance. I don’t know, it just seems that his world is being reordered by the prior events just as surely as Bryn’s and Eckard’s worlds, and he just has to quietly make peace with it as best he can.

Uncle Roland is a good one—I think mine is Eckard, but that might just be the beard. Let’s switch gears a little bit: How did you craft your world?

I’ve got this whole pretentious and rather dry response, but I’ll spare everybody my foray into verbal onanism. There’s a larger history to the story world, which is rooted in my interest in both the ancient Roman and the medieval worlds.

Both are great time periods to draw from. How did you decide on a setting? Is it based off of anywhere you’ve been in real life?

The setting isn’t really based on anything I’ve seen in real life. I mean, I can say that the landscape is inspired by the scenery I’ve encountered on my travels across the United States, but the setting is a very different place on a much smaller continent.

Let’s switch gears again: Who are your favorite authors?

My favorites? Oh, here we go. If I had to narrow it down, I’d probably say Brian Jacques, Rosemary Sutcliff, and Jack London, as well as Lloyd Alexander, C.S. Lewis, and JRR Tolkien.

Those are all great authors. Finally, what can we expect next from you?

I just completed a manuscript of a sequel to Exile. Beyond that, I have a couple of other works in progress which take place on the continent of Elzina, which is a location Bryn and the others visit in Exile.

Thanks again for talking to us today. Readers, don’t forget to join us this Saturday, December 12th for the launch party and your chance to win a free paperback copy! 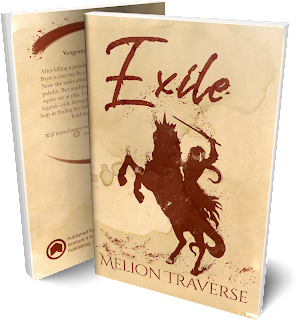 Vengeance. Atonement. Exile. After killing a paladin in revenge for her family, Squire Bryn is cast out by order of the god Avgorath himself. Now she seeks atonement with the father of the dead paladin. But machinations far greater than a disgraced squire are at play. Unicorn riders—believed to be only legend—ride through the land. A young sorcerer needs help in finding his father, and a mystery brews that could hold the fate of two worlds. Will hatred prove stronger than the need to preserve a crumbling world?