(Note: Songbird is no longer published with Authors 4 Authors Publishing. We encourage your continued support of Karen and you can find links to her work through her Twitter.)

Thanks for sitting down with me today! We’re excited for your latest book coming out this weekend.  What inspired you to write A Wider World?

I call A Wider World a not-sequel to Songbird. Despite having apparently begun writing one, I’m not always a fan of series books, because I like to wrap up my main character’s story at the end. My workaround for this is to pick a side character (usually the one who talks loudest to me when I’m trying to go to sleep) and give them their own story.

I was doing just that—drifting off to sleep—when I heard Robin’s voice said, “They said I would not end well,” and I sat right up and thought, “Who said? Did you?” And that was it.

There was also the minor matter of someone from A4A (Rebecca) saying that she thought Robin would have an interesting story. I didn’t think so at the time, but it came to me later.

Thankfully, I left myself enough crumbs about Robin in Songbird that I had a jumping off point: choirboy for Cardinal Wolsey, Oxford, travels in Italy, returning to work again for Wolsey, looking toward a future with Cromwell.

It’s always interesting the way characters will speak to us when we think we’re done with them. After writing Songbird, was the process any different for A Wider World?

I joke that if Songbird was a child, it would be accruing college debt by now, because I worked on it off and on for years. I started writing it just for my own amusement, but somewhere in those years, I decided I wanted to try for publication, and that required a whole different level of dedication, much less editing.

A Wider World was easier in the sense that I knew from the start it would be read by others. I also had some of my characters already developed, since they were holdovers from the first book. I did need to read a fair amount of history, because I knew about the dissolution of the monasteries only in a general sense, and it’s something that Robin is very much involved in, both administratively and emotionally.

The main difference in the writing of these two books was speed. Even with the extra research involved, A Wider World happened pretty quickly. I knew from the first idea that I wanted to tell it in two timelines, Robin’s “present day” arrest and journey toward the Tower, and the tale he tells his captor to distract him and hopefully slow their journey. It was handy because when I hit a wall in one timeline, I worked on the other for a while, and that usually led me right back to where I needed to be.

That’s really interesting, and a great way to tell a story. Now that you’ve got an (almost) entirely new cast, who is your favorite character?

Other than Robin, who will probably be my favorite character forever, it would be Ned Pickering. Ned’s a well-born second son who works with Cardinal Wolsey, and then with Cromwell. He forcibly befriends Robin and won’t leave him in the peace that he thinks he wants. I think of Ned as a large energetic golden retriever, putting his paws on your shoulders and licking your face. You’re trying to make him stop, but you’re also laughing because his affection and energy are so contagious.

Ned is a pretty sweet character. Was it more or less difficult researching for this book?

The research was pretty straightforward; it was mainly getting a handle on a particular occurrence (the dissolution) that I didn’t know as much about. I’m also not religious, so the extremes people went to for one religion over another—when they seemed more or less identical to me, other than the pope—was interesting. Robin takes my point of view, with the addition of a belief in God. He’s got a foot in both camps and mainly sees extremes of belief as the enemy.

Let’s switch gears a little: What about this time period drew you in?

The Tudor period has fascinated me since I was six, and I kept my mother company while she watched The Six Wives of Henry VIII on Masterpiece Theater. The more I’ve learned about Henry over the years, the less I like him, but the politics and people of the period are so intriguing.

I can’t say that I blame you—I find that Henry VIII is really just the Real Housewives of the sixteenth century. Finally, what can we expect next from you?

A third not-sequel, apparently. I’ve just finished and submitted Lady, in Waiting, which centers on Margaery Preston, a character introduced toward the end of A Wider World. Her story will take us through the early years of Queen Elizabeth I and Mary Stuart’s return to Scotland, in addition to being a story all about marriage (which was the part of the book I hadn’t really expected).

Thanks again for sitting down to talk with me today. Readers, join us this Saturday, April 24th, for the launch party and a chance to win several prizes! 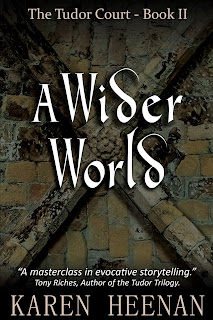 Memories are all he has…

Now they could save his life.

Returning to England after almost five years in exile, Robin Lewis is arrested and charged with heresy by the dying Queen Mary. As he is escorted to the Tower of London, Robin spins a tale for his captor, revisiting his life under three Tudor monarchs and wondering how he will be judged—not just by the queen, but by the God he stopped serving long ago.

When every moment counts, will his stories last long enough for him to be saved by Mary's heir, the young Queen Elizabeth?