Beatrice, thanks for sitting down to chat with me today! Let’s dive right in, shall we?

We’re now getting into book three. Is there anything you’re particularly excited about for the readers going forward (without giving any spoilers, of course)?

I'm excited to get into the second half of the series. We're going to see more of the world and glimpses of ancient history. The story is expanding; Juniper is going to be facing tough choices about herself and her future. And there're dire wolves!

Being a history person myself, I did quite enjoy getting to see the history of the people. Juniper is still heartbroken at the end of book two—do you think this influences some of her willingness to go into battle as she travels north?

Definitely. She feels she's lost everything and has nothing left to lose. She doesn't have the Undercity to return to, and she doesn’t have anyone one—namely Reid—to return to. She is willing to walk face-first into danger. Traveling into Nexon’s den of mages is her only goal at the start, and despite not having a clear path to that, it’s her only goal. She throws everything she has at it.

That makes sense—if there’s nothing to live for, why not go hard? Tell me, has your favorite character changed for book three?

Hmm… I still love Juniper to death, but I’m glad that we get to meet a few more characters that have until now been in the background, like Henry Julian. Juniper will remain my favorite—that’s why she is the main character, and not Reid or Ison. I wrote a part of my soul into her.

I’m sure a lot of other writers also feel the same way about their main characters. Let’s switch gears a little bit. We’re going to some really interesting places in this book—was there one that was your favorite to write?

I love fantasy because I can explore all manner of places, the only limitation being my imagination. I love ancient structures, the ones where we have no idea who lived there or what kind of society it was. All we have are ruins. When Juniper and her friends explore the mountains of Galamond, they stumble upon an ancient city, abandoned of course. That is one of my favorites that I’ve written thus far. There is something mysterious and enchanting about ancient places and the stories just waiting to be told.

And finally, last question: What can we expect next from you?

My next book is the third and final installment in the Hard as Stone trilogy: Strong as Steel. We’ll see the epic ending to Raven’s story. 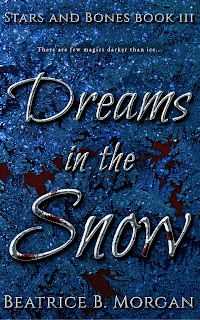 Dreams in the Snow

by Beatrice B. Morgan

After faking her death at the hands of the Watch and escaping Rusdasin, Juniper and Ison are determined to make their way north to face an ancient evil. And the friends they left in the Undercity must scramble to escape the impending raid of their home.

Meanwhile, Squire Reid is beginning a northward quest of his own. To earn his knighthood, the king has tasked him with retrieving Boxel’s Grace, a legendary plant at the edge of the world and the only hope of reviving Prince Adrien from a magical poison.

When grieving hearts collide with the ghosts of their past, can they survive to save the future of their world, or will they shatter like ice?