K. R., thanks for sitting down with us today. Let’s dive right in, shall we? What inspired you to write The Spirit of a Rising Sun?

To be honest, I was just kind of bored. An idea popped into my head one day for a scene, and from that scene was born a character, and a world, and then a plot, and before I knew it…I had an entire story! I didn’t really work on it for a long time, but after I started writing, I fell in love with the craft and didn’t stop until I finished the book. In terms of what inspired me, I knew I wanted to write epic fantasy—something big, exciting, and with plenty of thrills. But I also wanted to challenge epic fantasy’s usual political and economic worlds—think monarchies, kingdoms, empires, feudalism—and tell a story that could feature a more egalitarian community, rebellions, revolutions. That’s where the Ungoverned come in. I really wanted to write a fantasy story where the characters engage with the subject of revolution—how to achieve it, what are we willing to sacrifice for it? As the series goes on, we’ll see the characters really pushed to these limits.

We’ll certainly look forward to seeing them push their limits. Are there any themes, symbols, or motifs in your story?

Definitely! There’s the theme of navigating intense social and political change. I imagined Vaaz to be a late medieval society that’s constantly at risk of breaking apart. There are the Haf, gun-wielding invaders from across the sea. There’s a corrupt church in decline, clinging to control and asserting the old ways against change. There’s rebellion in the swamp and a powerful empire grasping for supremacy. It’s just anxiety and collapse everywhere—how do you fix a world like this? How do you possibly stay positive? How do you find hope?

And this is where the other theme comes in, the tension and contrast between Liviana and Oyza. Liviana, I thought of as a kind of modernizing figure—she doesn’t like the inefficiency of the church, and she can’t stand how the empire’s being run. To fix the problems, she takes an authoritative approach: do as I say! And so we see her always responding with force and power. “The world stirs, but it will not stir us,” she says. She’s so strong, and yet this thorn in her side just nags at her—Oyza.

Oyza, on the other hand, more follows her own heart. She’s got this personal journey to find her lost family, but all these years locked up have forced her to dream all while enduring horrors. And when she’s finally free, she wants to stay true to her dreams, though she’s grasping for a moral foundation as she finds her own voice throughout the book. The question then is, how do you lead? How do you convince others to live their lives in the service of a greater cause? For Liviana, the answer is through acquiring power. For Oyza, the question itself is less important: she follows her dreams, and if others choose to follow her too, then that’s superb.

Last, there’s also the theme of transcending boundaries. What kinds of (new) solidarities can be built that can challenge power? Are differences always insurmountable, or can a common cause be found that allows us to transcend our particular experiences toward something universal? These sorts of questions really factored into how I thought about the story thematically.

The readers will certainly have a lot to ponder over while they read. You mentioned a couple of characters—who is your favorite character in the book?

Honestly, probably Liviana. I loved how she just doesn’t take shit from anyone. She’s so ready to lead, to take over, and to really just clear away all the old stagnant things in the world that get in her way. (But a close second place is the fabulous ship captain, Captain Seralus!)

She’s definitely a woman who knows what she’s about. How did you craft your world?

In Vaaz, there’s a religious system that’s very inspired by astrology. I’ve always loved the stars, and I wanted that to play a role in the story, which took the form of shaping the world—the Starmarks and the Celesterium. But I also wanted the politics of it all to really shape the world, too, and I was definitely inspired by real historical examples of peasant uprisings, rebellions, pirate mutinies, that sort of thing.

Very interesting! Let’s change gears a little: Who are your favorite authors?

Perhaps cliché, but certainly George. R.R. Martin. I devoured A Song of Ice and Fire. And certainly Tolkien, as well as Ursula K. Leguin. Outside of novelists, I’m a big fan of Final Fantasy games for their stories.

All great authors. We’ve got one final question for you: What can readers expect next from you?

I hope to have the second book out in 2023! Otherwise, I’m planning to update my blog regularly, including some bonus content that was deleted from the book.

K. R., thanks again for talking with us today. Readers, make sure you join us on Saturday, September 4th for The Spirit of a Rising Sun’s launch party and your chance to win a free copy! 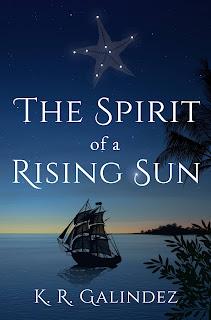 The Spirit of a Rising Sun

Oyza yearns for revolution—an impossible dream with her lifetime prison sentence. Fueled by the destruction of her home and years of servitude, she reads the smuggled texts of the Ungoverned and dreams of a future that can never be. But the arrival of a new prisoner, Yars, reignites Oyza’s courage. She finds herself capable of more than she ever imagined.

To fight their way to their own freedom, they must fight for something bigger: freedom for their homeland. Between an invasion by godless gunwielders, a heartless commander who’s determined to kill Oyza, and webs of secrets and lies woven through their world, it will take all their strength and wits to survive. When blood is spilled, how much will be their own?