Rebecca, thanks for sitting down to talk with us today. Let’s dive right in, shall we? What inspired you to write The Anatalian soldier?

I’ve always enjoyed writing stories, starting from my early teens and on, but I didn’t really start writing until I was living in South Korea with Mr. M. My mother always told me that I’d write a book one day, and being stuck in our incredibly small apartment all day and unable to find a job, I thought it was time to give it a try.

I started writing a single scene to see what would happen, and from then on I was hooked. I haven’t been able to stop thinking about writing since.

It’s funny how books can happen out of boredom. Tell us, are there any themes, symbols, or motifs in your story?

I wanted to answer this question no because I don’t particularly feel like books need to have a lesson in them, but all authors put in themes and otherwise whether we intend to or not. I’ve found that I have running throughout the whole series themes of courage and perseverance—both Liam and Margaret have to overcome the obstacles in their lives on their own, all while trying to be successful at it. Growing up in a military family, this was my life. We had to persevere anywhere we went, and we went a lot of places, so I’ve unconsciously infused it in my books.

Those are things that I think everyone can relate to in their everyday lives. Who is your favorite character?

This might be a little surprising, but my favorite character is Lord General Crompton. He’s a morally gray character that will eventually surprise people. I also really like writing King Sorren—he’s such an evil character in later books, but there are still moments where you kind of like him. To me, these characters are much more of a challenge to make people like, and thus I enjoy them more.

That isn’t to say that I don’t like my main characters—if I didn’t, I wouldn’t have written this story with them as the focal point, but they’re not as challenging to make the readers like.

Morally gray characters can definitely be fun to write. How did you craft your world?

Well, I initially thought when I started writing that I was going to do a straight historical fiction, and then not being able to have access to any research libraries in English, I thought instead I would make it a fantasy inspired by history. I modeled the political climate after the Wars of the Roses. The clothes and other elements in the book are kind of an amalgamation of other time periods. I’m particularly fond of the silhouette in the 17th century, but I don’t always follow that rule…because I do what I want.

You’ll find a lot of easter eggs for the history buffs out there—and I’d love to hear about when you find them, readers!

You mentioned modeling it off the Wars of the Roses, what about that time period drew you in?

Well…this might be a slightly unexpected answer, but I really enjoy the absolute petty nature of the Wars of the Roses. Two sides of a family can’t stand being in power so much that they’ll literally murder each other to make sure that they can keep whatever power that they have.

That’s certainly one reason to like it. Let’s switch gears a little: Who are your favorite authors?

I’ll always have a special love in my heart for David Eddings—his Belgariad series is what hooked me into reading in the first place. Having dyslexia, reading was not my thing until I was gifted his series, and a whole world was unlocked for me. I’m also a huge fan of Diana Gabaldon’s Outlander series and Kristen Britain’s Green Rider series.

All great authors. We’ve got one final question for you: What can readers expect next from you?

Gosh, there’s a lot to expect, but for now, I’ll have my second book in the series, The Anatalian Countess, out in November of next year. You’ll also be able to look forward to the remainder of the books in this six-book series, and two to three (because my brain won’t stop creating books) other stand-alone novels completely unrelated to the Anatalians. If you’re wanting something short and more immediate, you can check out my short story, “The Measure of a Princess.”

Rebecca, thanks again for talking with us today. Readers, join us for the launch party of The Anatalian Soldier, on Saturday, November 20th for your chance to win a free copy! 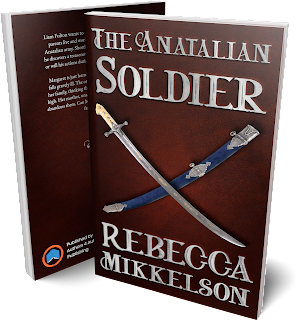 Liam Fulton wants to see the world beyond the vineyard his parents live and work on. The only option he sees is the Anatalian army. Shortly after he joins, war breaks out, where he discovers a treasonous plot. Will he come away unscathed, or will his actions during the war irreparably change his life?

Margaret is just learning to fit in at court when her father falls gravely ill. The other courtiers start to pull away from her family, thinking they're cursed by God for reaching too high. Her mother, unable to handle the pressure of scrutiny, abandons them. Can Margaret figure out how to care for her father on her own?