Faith, thanks for sitting down with us today. Let’s get started, shall we? What inspired you to write Where Ashes Reign?

I was driven by the question of what forces can overcome hatred, even the most deeply rooted kind. In 2012, during a peak of violence in the middle east, I watched friends bitterly divide based on allegiance to different sides of the conflict. As someone without personal ties to the region, I was shaken by how deeply rooted hatred ran, and that even in an academic setting, my smart, polite, and compassionate peers turned against each other with little chance for constructive conversation. Friends became enemies based on their positions, histories, and beliefs. It drove me to consider what forces, if any, can overcome such animosity, and if it’s possible to achieve peace. These are the themes that motivated my creation of a fantastical world plagued by war, which I felt could examine these ideas in an objective way.

That’s a really great inspiration. Are there any themes, symbols, or motifs in your story?

Definitely! I’ve always loved discussing motifs, symbols, and themes in whatever book I’m reading, and themes are often what I first brainstorm about before I start to write. I find it satisfying to include these and think they add depth and intrigue to the story.

Definitely. Who is your favorite character?

This is a difficult one to answer because I like them all for different reasons. I think my favorite is Emory, with Laileth second.

Emory is a great character, for sure. How did you craft your world?

I had a few specifications in mind geographically—I wanted it to resemble Mesopotamia’s fertile crescent, and for the civilization’s livelihood to be based around rivers, which would make the threat of drought devastating. I also wanted mountains to create a valley, as a type of enclosure for this world which I envisioned as a microcosm. As far as creating the three kingdoms, I went through a long research phase and drew on aspects of ancient Mesopotamian civilization including religion, weaponry, and division of labor. I also focused on developing distinctions between each of the kingdoms to set the stage for conflicts and clashes of culture.

That’s really cool. What about this time period drew you in?

Most of us remember ancient Mesopotamia as a cradle of civilization, with one of the earliest documented systems of justice. I thought this setting had a part to play in my exploration of conflict, allegiance, and war, and in some ways could serve as a mirror of our modern-day world.

Let’s switch gears a little—who are your favorite authors?

That’s a great list. We have just one more question for you: What can readers expect next from you?

I would like to continue the story of Where Ashes Reign. I definitely have more in mind for each character’s arc and the world they live in.

Thanks again for sitting down with us today.

Readers, make sure to join us this week to play games for a chance to win a free paperback copy of Where Ashes Reign and join us on Saturday, December 18th for the launch party. 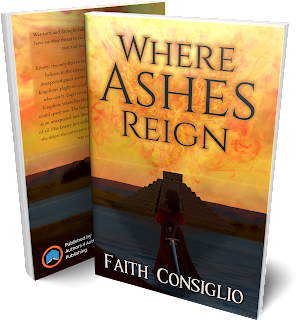 War-torn and drought-ridden, the three kingdoms of the river valley have another threat to face—dark spirits, feeding off hatred, possess men and beasts to slaughter and devour.

Emory, the only heir to her kingdom's throne, is one of the last who believes in the eternal realm, but her faith is fading until an unexpected guest arrives, claiming to be from there. Blaming the kingdoms' plight on a curse, he needs Emory to help defeat the one who cast it. Eager to escape the palace, she ventures into a rival kingdom, where her identity could mean death and one misstep could spark war. The fate of the kingdoms now depends on her, and as an unexpected love blossoms, she faces the most dangerous threat of all. Has Emory just walked into a trap that could cost her life? Can she defeat the cursecaster on her own, or will the land be ravaged by war and dark spirits forever?